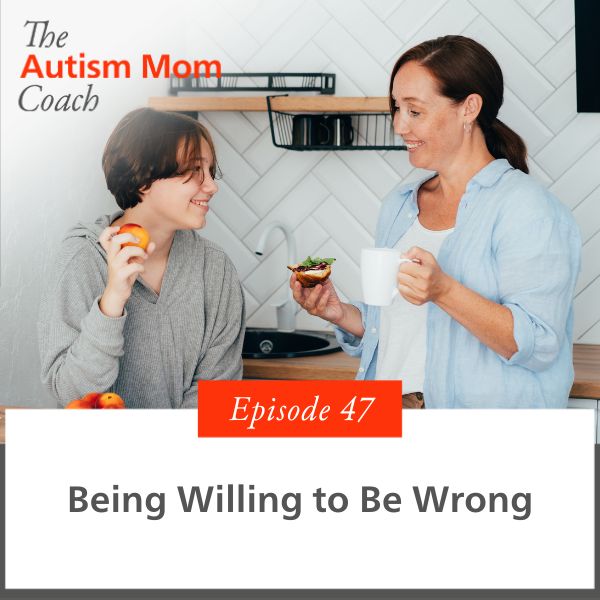 Being willing to be wrong is going to require that you’re willing to loosen your grip on your current belief systems so you can consider the alternatives. Making this change isn’t easy, but if you’re living with the fear that you aren’t doing enough for your child, catastrophizing about the future, or blaming yourself for your child’s struggles, a willingness to be wrong will change everything.

Our brains love certainty, even if it means being miserable. So, tune in this week to discover how to open yourself up to vulnerability, questioning what you think is right, and being willing to be wrong about the belief systems that are keeping you spinning in the hamster wheel of pain and self-doubt.

Learn how to keep your cool when your child is melting down in my brand new minicourse: Keeping Your Cool. All you have to do to get access is sign up to my mailing list in the pop-up on my home page!

What You’ll Learn from this Episode:

Listen to the Full Episode:

Featured on the Show:

Welcome to The Autism Mom Coach, a podcast for moms who feel overwhelmed, afraid, and sometimes powerless as they raise their child with Autism. My name is Lisa Candera. I’m a certified life coach, lawyer, and most importantly I’m a full-time single mom to a teenage boy with Autism. In this podcast I’ll show you how to transform your relationship with Autism and special needs parenting. You’ll learn how to shift away from being a victim of your circumstances to being the hero of the story you get to write. Let’s get started.

Welcome to the podcast. I hope you are doing well and staying warm if like me, you are in a cold climate. Before we get to today’s topic, I want to remind you, if you are not already on my mailing list, get on it now. I will be releasing a free video course very soon all about how to keep your cool during an Autism meltdown. In this video series I will walk you through my three part framework for keeping your cool when your child is dysregulated. I am not going to tell you to just stay calm.

I am going to show you how to create your own calm so that when your child goes high you can go low, or at the very least, hover at neutral. If you are listening to this episode now on the day of release you can get on my mailing list by going to my website, theautismmomcoach.com, just wait a couple of seconds and a popup will appear for you to enter your address.

Now, if you are listening to this episode sometime after the release of my video series, same thing just go to my website and you will actually get a popup to take you right to the video series. Anyhow, if you get on my mailing list right now you will be the first to receive this series when it’s released.

Alright, onto today’s topic, the willingness to be wrong. It has been a really busy few weeks in my coaching business. I’ve been coaching my current clients and onboarding new ones. And although they are new clients the issues aren’t necessarily new. As much as their individual circumstances differ, many of my clients come to me with very similar struggles, things like fear that they aren’t doing enough or the right things, catastrophizing about the future, blaming themselves for their children’s struggles. Or just losing themselves in the quest to do everything that they can to help their child.

The other common denominator that I am noticing in each of my clients and the one that I think really enables them to make so many changes so quickly is their willingness to be wrong. This is not an easy thing. The human brain likes certainty. As Virginia Satir wrote, most people prefer the certainty of misery to the misery of uncertainty. That’s been my experience, each of my clients came to me certain in their misery, certain that they were to blame for their child’s Autism, certain that their child does not love them, certain that they could not have the kind of relationship that they wanted.

Certain that Autism meant that their child was defective, certain that they no longer had the luxury, or even the right to take care of themselves, certain and miserable. And yet all of them were willing, not excited but willing to be vulnerable and question the belief systems that were keeping them spinning in the hamster wheel of pain and self-doubt. Beliefs like my child never listens to me. Going out to dinner is always a disaster. No one understands us. I always lose my temper. I never have time for myself. Other people are judging me.

When we are willing to question our beliefs, when we are willing to consider the possibility that we may be wrong or that our version of the story is not entirely true, we create possibility. And this is where our growth lies. Let me give you some examples. For one of my clients, each day she would return home from work and her daughter would either ignore her or yell at her, one or the other. But she never did this with my client’s husband who also worked outside of the home.

My client was taking this behavior very personally. She thought things like, my daughter doesn’t love me and I am a bad mom for not being here for her.  So I asked her, “What might also be true about your daughter’s behavior?” And to this she said, “I’m her person. She really misses me and she doesn’t understand how to communicate this so it shows up in her behaviors.” And for my client this was equally if not more true than the other thoughts, those default thoughts that she was having. But these were again her default thoughts when her daughter was yelling at her or ignoring her.

Her inclination was to think she doesn’t love me or I’m bad, I have done something wrong, I’m not a good mom. And so her willingness to be wrong, her willingness to sort of loosen her grip on her story enabled her to get really more factual about what was happening. And when she did this, she could show up in a different way, more compassionate and understanding towards her daughter and herself as well.

Another client came to me believing that the working conditions at her former job were the cause of her son’s Autism, and that that therefore meant his Autism and all of his resulting struggles were her fault. She believed this so much that she reported it to me like it was the weather. I worked at x job for the amazing pay and opportunities and this job resulted in my child having Autism, therefore I am a selfish person and to blame. And every time her child struggled she attributed her struggles to his Autism and then blamed herself. A vicious and painful circle.

Once she was able to loosen her death grip on her belief that she was the cause for her child’s Autism, she was able to look at the situation in a much different way. And when this happened she was a lot more kinder to herself and just more at peace because really this story was not helping her at all. It’s not as if knowing the exact cause of why her child is now Autistic was going to help her in raising him and supporting him or supporting herself. That’s what’s possible when you are willing to be wrong and question your beliefs and be vulnerable and brave.

There is so much more available to you, it is not either or which is where we get to when we want certainty. We want to know the reason. We want to believe that we understand that we have all the thoughts and that we are right. And as uncomfortable as it can be to really just question yourself and look under the cover of those beliefs, it can open up so much more impossibilities for you.

Alright, that’s it for this week. And remember, if you aren’t already, get on my email list. You are not going to want to miss this video series that I am going to be releasing really soon, how to keep your cool during an Autism meltdown. Again you can get on my email list by just going to my website, theautismmomcoach.com and when the popup pops up enter your email address. Alright, I will talk to you next week.

Thanks for listening to The Autism Mom Coach. If you want more information or the show notes and resources from the podcast, visit theautismmomcoach.com. See you next week.